“The Shadows of the Everyday” has a sister piece which was started a few days earlier. “Transparent Passage” utilizes a similar list of materials but is less regimented and .linear in composition.

Aside from watercolor portraits, I am starting a large installation piece entitled “Real”. The premise behind it is that all 2-D art has a semblance of reality, and everything I put on canvas reflects mine. I had originally thought that these pieces would all have a direct relationship to my “cancer pieces”. That would be ridiculous since so much of my life has nothing to do with being sick.

So, there will be an element of randomness about the series that will make up the installation. I sat down today to work on another abstract  and ended up painting a small portrait of David Bowie. In a very mysterious number of ways, that makes so much sense. His album “Blackstar” was released today, and he would have been 70 also today. Blackstar is a type of cancer lesion. He died of liver cancer. (Blackstar is associated with breast cancer.) 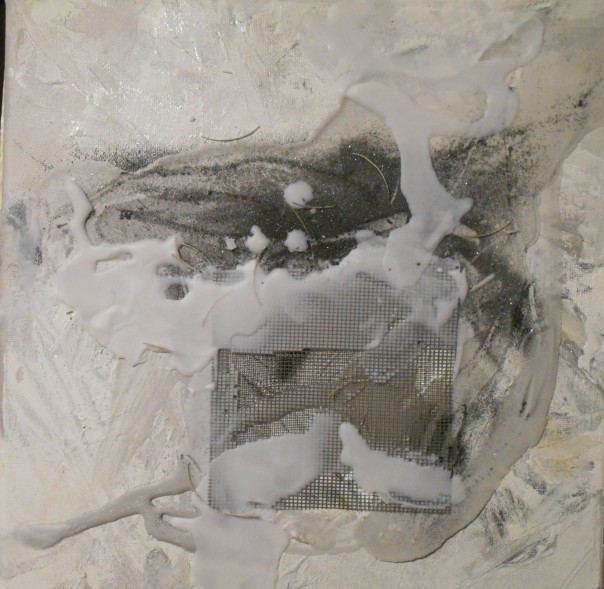 “In the Name of Progress”, and my solo this month 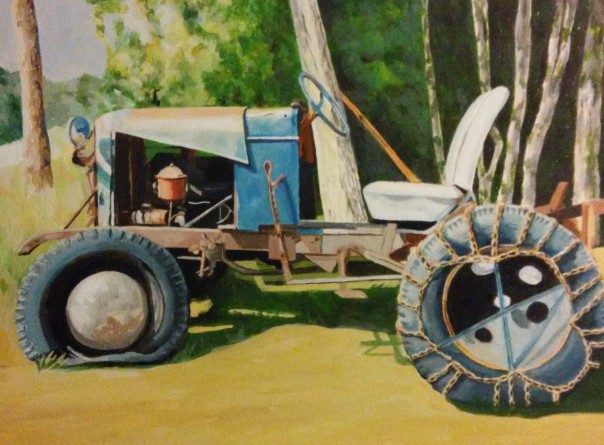 This is finished just in time for my show this month at the Franklin Gallery, in RiverStones Framing at 33 No. Main Street in Rochester, NH called “Transitions and Transmissions”.

To me, this image speaks volumes about how progress has left so much of our past literally in the dust. So much about the context of this is wrong. Where’s the farm? It’s parked on the side of US 202 in Maine. The flat tire and the chains in the middle of summer also adds to the story.

The collection that will be included is half abstracts and half pieces similar to this one.

I hope you can stop by for the opening reception on August 11, from 5-7. 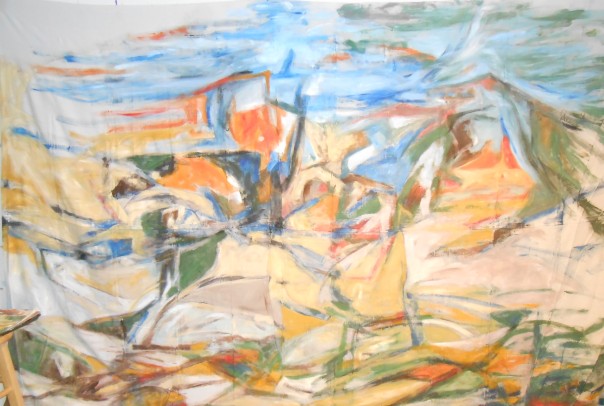 This image says a lot about me.

Home is California. Tribal home may be Ojai, though I am not entirely sure of that. I just know when I am there, it feels like home.

It’s painterly, and geometric. Bright, but I also can work really complex color.

A lot has been done to prep for this show, and I am really getting excited!! Press is already picking it up and I hope there is more to come!!

And, the public is certainly invited!!

What a way to reopen!

Blackbird Studio and Gallery is very honored to host our reopening for 2015 with a special guest author, Carolyn Chute, who will give a talk and book-signing next Saturday,  April 18, from 1-3 pm.

I stopped by today, to see the new ceiling. We will be ready.

The gallery officially reopens on Wednesday.

We are planning a variety of events throughout the season, so please visit blackbirdmaine.org

“The Folly of Sentiment”

I have a favorite new work of mine.

As I am allowing myself to explore, reinvent, and recombine that which I’ve done before-none of this is new territory if you know my entire body of work-but I continue to surprise myself.

I am far more comfortable in a larger format on canvas than on paper, but that is changing.

“The Folly of Sentiment” is another flex of my artistic muscle where I am employing some of the new things that I am seeing, but more so, utilizing materials and techniques, palettes, etc that I have in the past and combining them in different ways. “Valentine”, presently at the BUOY Gallery in Kittery, Maine, was the first of the “Portraits” to include assemblage elements, with bits of magazine photos. I found foil paper and a plastic mesh “bag” (which I cut apart and stretched) to integrate into this piece.

The last Blackbird Studio and Gallery newsletter reiterated something that I said at an opening, but I am not entirely sure it is 100% correct. It said that I am being “influenced” by whose working around me. I don’t doubt that that is happening but this little piece, painted just after I broke my leg, might show that the “Portraits” have always been there.

The “Portrait” series actually has an even earlier ancestor in a series called “Everyman”, which dates back to 1990. So, it really is too soon to say the influences come from Blackbird, which isn’t a bad thing, but more that those influences have awakened other muses within me, that were just dormant. I don’t have digital images of the “Everyman” series  yet, but they are also the predecessors of the large 2014 canvas “Chasing the Sun”.

This and a few other new pieces will be in the opening exhibit at Blackbird Studio and Gallery. We are also very proud to be hosting a visit by Carolyn Chute, author of “The Beans of Egypt, Maine”. Please join us for this event on April 18, from 1-3.

The Rochester Museum of Fine Art owes much to the area libraries since we own nothing more than art. And, what a great thing to own-but only if you have a place to put it up!! We are getting more permanent space at the Gafffney Library.

I stopped at the RPL, hoping to map out my next show there, as well as to see the show on the 1st floor, and the new show at the  Carnegie Gallery, on the 2nd.

First, the student show on the 1st floor is superb!! 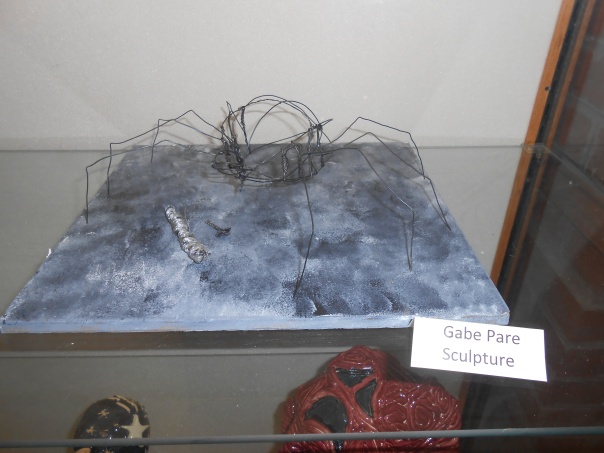 I was really taken by this piece, but there are really nice 2-d pieces that just didn’t photo well of because of lighting. Really nice, Spaulding High School!!

Upstairs, in the Carnegie Gallery, we just hung Benjamin Cook.

We also have more of his work for the Carnie Medical window.

More pop-ups will happen soon!! Benjamin Cook is next!

I have a one-person show up though the end of the month at Timeless Framing in Rochester. NH. I stopped to see it next on my “art around the area”.

These are all of the recent “Portraits”, and a few of the transitional works.

The opening  reception for this is next Friday, from 5-7.

“Some of my Sisters”, ISIS and art

Art and politics works…sometimes. Most of the time, the art should be on the poster of the cause, and left there. But, not always.

I am of the mindset that political and social consciousness should be an underlying part, but hitting someone over the head with it…not my game.

I read an article yesterday in the Rolling Stone: http://www.rollingstone.com/culture/features/teenage-jihad-inside-the-world-of-american-kids-seduced-by-isis-20150325 This is incredibly chilling and scary.

It has obviously been brewing in my brain, because this was created today: 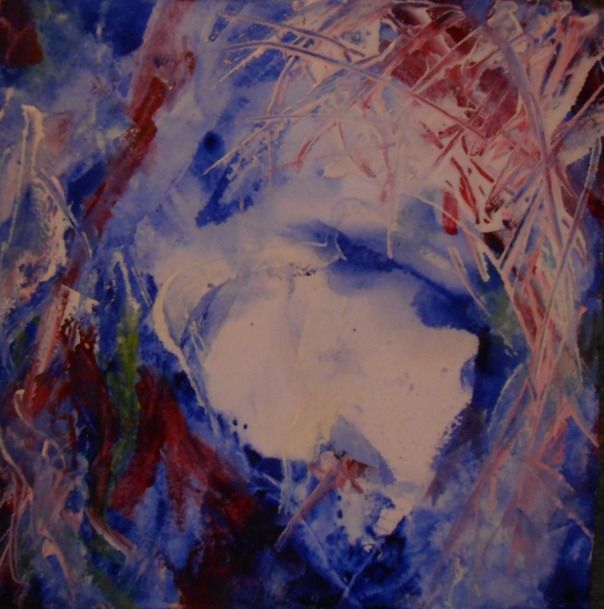 “Some of my Sisters”, (c)Daryl-Ann Dartt Hurst, mixed media on paper

I don’t need to swear, wave a tampon in your face, ask you to eat me, or whatever.

I need to make you think, and hard, about what ISIS is doing to “Some of my Sisters”. And, yours.